Wow we had a busy Labor Day weekend but it was all good.  It is no secret that autumn is far and away my favorite season but I do my best to enjoy each season and holiday in it’s own time.  This weekend we managed to combine the best of summer: swimming and grilling out, with the best of autumn: apple picking and college football.

We started out with an after dinner swim on Friday night which was marvelous.  It is dark here by 7:30p and it feels so different swimming under a night sky.

On Saturday morning  I had my first bowling of the season with my once a month league and Saturday evening it was time for Wildcat Football.  Yes they lost but the marching band still rocked it!

Sunday we had a quiet at home day planned so we could recover from the late night. (Will the Pac-12 ever see reason and schedule for the convenience of the team and the fans?)  I did some laundry and watched the Cubs win and then we all went for a swim.  Luckily we grilled our burgers early as a rumbly thunderstorm dropped in.  So after dinner we played Sagrada and then retreated to our separate spaces to read , listen to the rain and in my case watch “Bridget Jone’s Diary”.  We got a nice amount of rain overnight, always appreciated here.

On Monday we drove to Willcox and Apple Annie’s to pick apples, pears and peaches.  We shared some pie (apple crumb and pecan) and ice cream and enjoyed the very blue sky and a refreshing breeze.  We came home for one last swim joking about how the pool would be closed the next day.  (That idea completely confused my son.) We played with my son’s waterproof camera taking all kinds of crazy pictures and movies and had a blast. 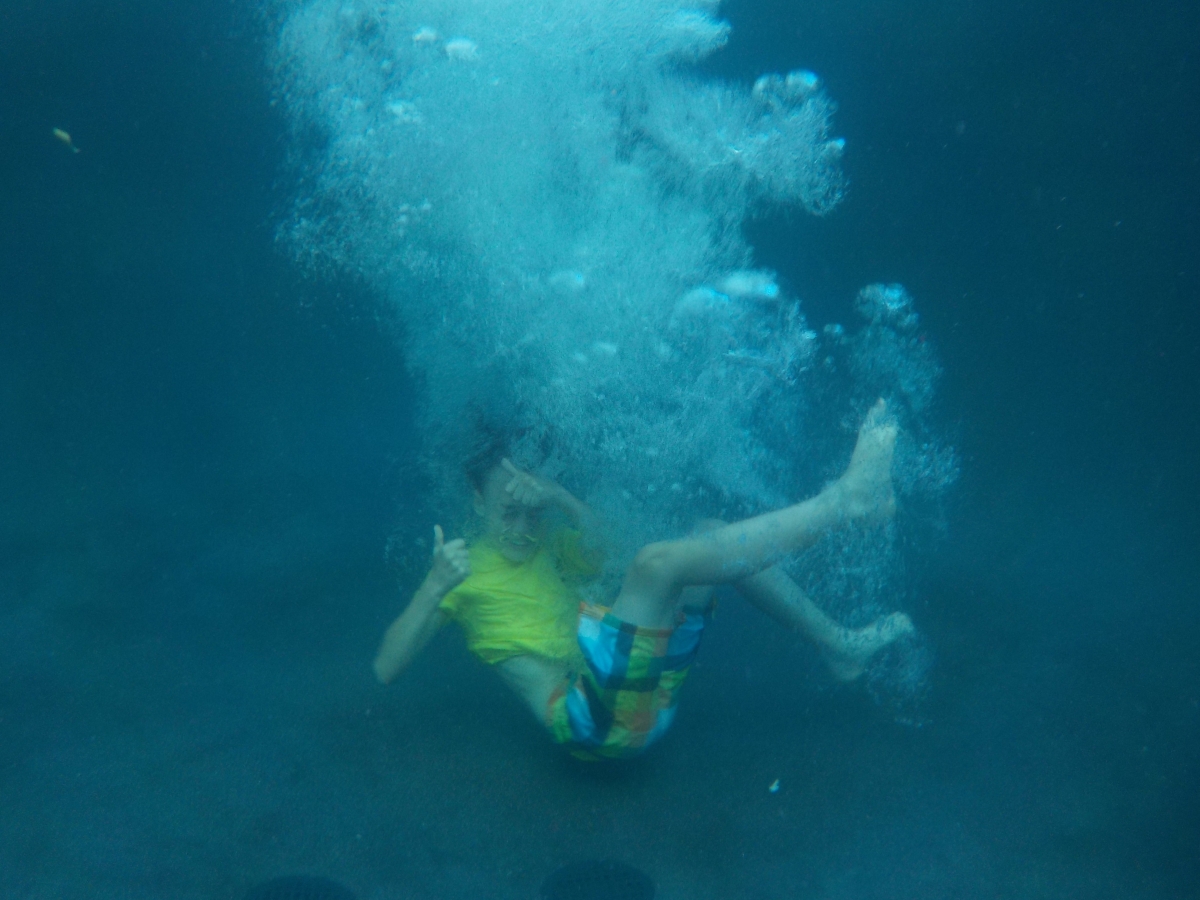 No autumn temps here for at least two more months, maybe longer, but mentally I am already switching gears. I washed my fall quilt today (same weight as my summer quilt just a different design) and pulled out my new orange ‘Life is Good’ t-shirt decorated with leaves that I have been saving.  The weather channel announced it is now meteorological  autumn and that is good enough for me!  Over the next two weeks I am sure I will be slowly sneaking bits of autumn into my life. 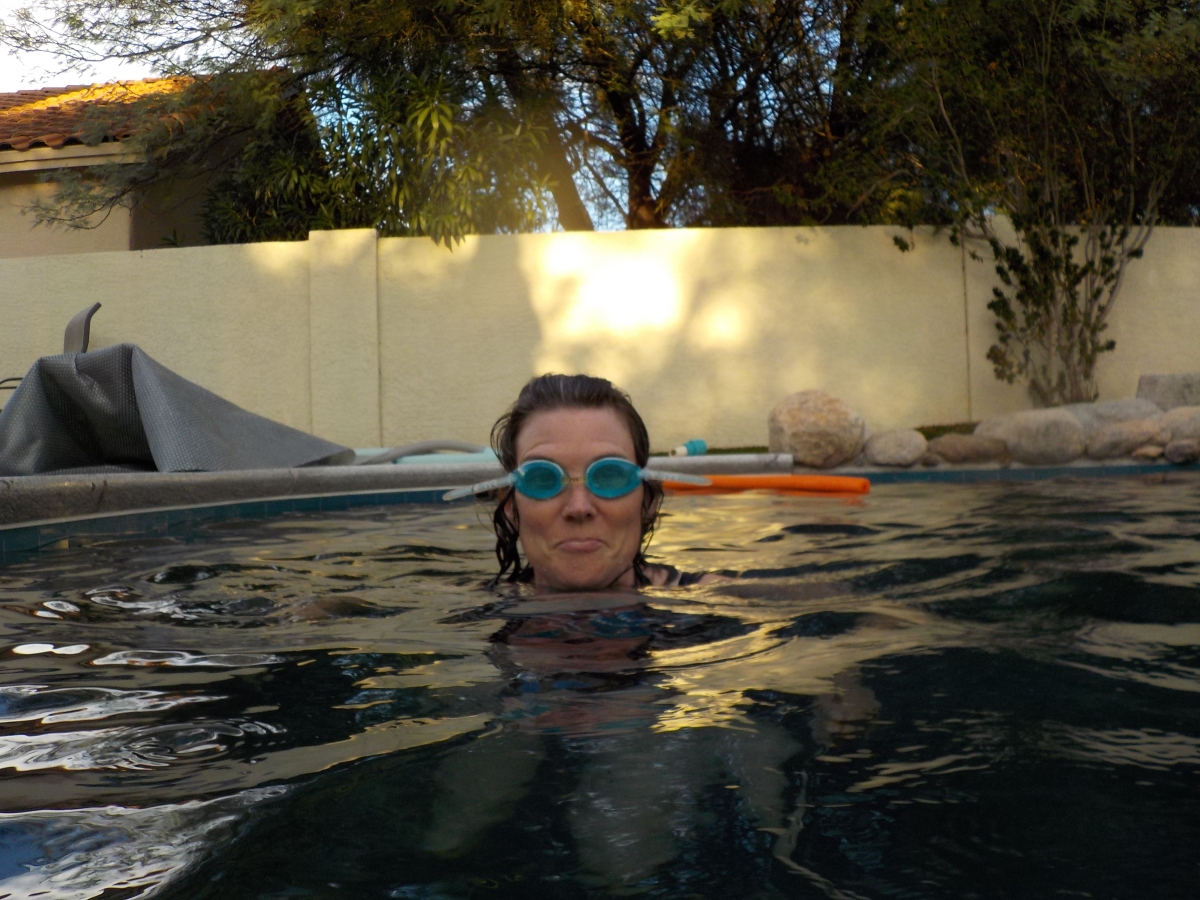 Yes, this is one of the silly pictures of me.

Something I accomplished: I cleaned up my office.  I started with just wanting to declutter the shelves a bit and ended up doing a lot more. I threw away two bags of garbage, 2 bags of recycle and have one box of donate/sell stuff. Now when I walk into the room I smile.

Something I changed:  So maybe this is a little weird but I changed my deodorant and I love my new one so much.  It is not supposed to leave those yellow stains on white shirts plus it seems to just work better.  Kind of a big deal here in the desert heat. Speaking of which…

Summer is here: The heat seemed to roar in overnight, poof 100° days.  The good news is I had my first swim of the season over the weekend.  The water felt wonderful.  The bad news is allergy season is still at its peak and I woke the next day with bloodshot, weepy crusty eyes.  Not good.

A fun project: The end of school is fast approaching so I wanted to make some little notes for my son’s lunch to count down the last 10 days. Found some cute numbers to print out and color and put them on summer scrapbooking paper.

Paint Chip Poetry: I felt like writing a bad poem this week so here it is. (I am re-reading “If You Want to Write” by Brenda Ueland so blame her.)  I chose three yellow and one orange (for the heat) and one green (because it is still spring).  Paint chip words are in italics.

My zest for life was wilting

Summer had settled in for good,

startling me with its ferocity.

I pick a spring of mint

for my morning iced tea

not emerging again until the

of the afternoon monsoons arrive –

And how was your week? 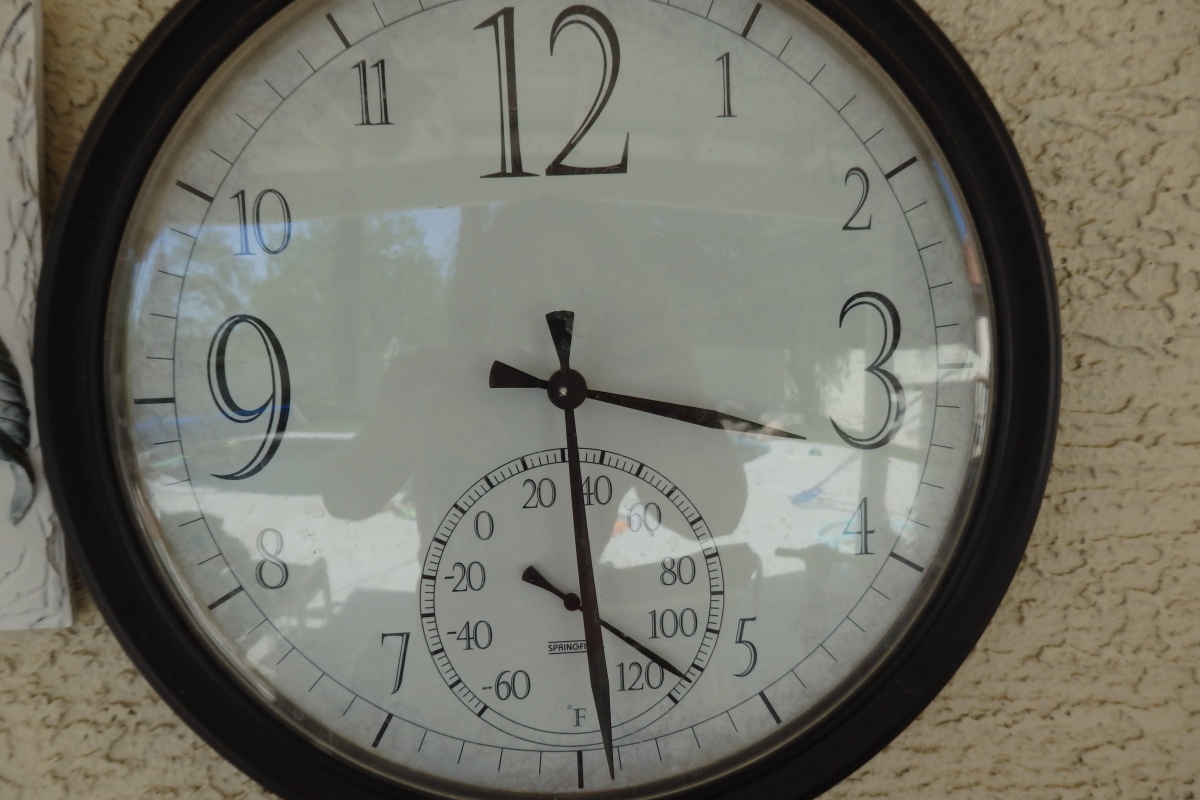 With all the rain and tropical systems and storms you may not realize it but we are having weather in the southwest too.

It is no secret that I am not a fan of living in the southwest but I have been trying  to make the best of things.  This week I was a bit dubious of the crazy hot temperatures forecasted but it turns out crazy hot was the correct forecast.  And then I had one of my mini-epiphanies: this is extreme weather.  This is my blizzard or hurricane!

So I acted accordingly.  I made sure we were well supplied with toilet paper and popsicles. I made a rough plan for my son and I.  We would each have the morning to do our own things.  Computer time for him, laundry, housework and blogging for me.  After lunch we would do some sort of cleaning project, work on a puzzle, play games, watch movies. We would hunker down and wait out the storm, er hot air.

After lunch my son and I completed our project for the day, sorting out his bookshelf.  We came up with 3 bags to take to Bookman’s next week  after this spell of ferocious weather passes.  Then we worked on this puzzle:

Followed by watching what has to be one of the worst sea creature movies ever, “The Creature From the Haunted Sea“.  The creature had ping pong balls for eyes and regular swim flippers for feet. The plot line suited such a bad creature.  The movies most redeeming feature was the fact that it was just over an hour long. Whew.  Maybe it would have helped if I knew it was supposed to be both a comedy and a thriller? (Probably not.) 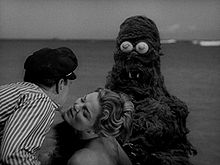 Then we put together dinner.  I decided that in the event of extreme weather (as long as one has power) comfort food is called for.  We went with meatloaf, mashed potatoes and broccoli.

And then the pool beckoned for my son and his neighbor friends. And after the neighbor kids left I got in the pool and paddled around watching the day end.

Pretty much a repeat of Day 1 but with clouds.  Odd clouds.  It never felt like rain and it is unusual to have clouds in the morning.  During the summer you may see a few puffy white clouds floating around in the morning but monsoon rain clouds don’t roll in until late afternoon or evening.

But today we had flat whitish gray clouds pretty much covering the whole sky most of the day. But it didn’t affect the heat, still 102° at 11:00am when I brought in the laundry.  We topped out again at 114°,  but by 4:00pm it felt like storms might be edging in.  The air went from dead calm to breezy and the temperature plummeted to 110°!

I am probably one of few people in North America who is celebrating that the days will now be getting shorter.  Less sunshine, yeah! To celebrate I decided ice cream sundaes for dinner and to make them extra special I baked a pan of brownies. For dessert we had leftover pizza.

Then we waited for the winds to die down a bit, peering anxiously out the windows to evaluate the clouds and look for rain or lightening.  We didn’t see either so then we took our traditional Summer Solstice night swim. When we exited the pool at 8:45pm (full dark here, no gloaming time in the southwest) it was 100° and we could see stars.

Found in the bottom of the pool:

Seen above the pool: seven F-16’s from the Air National Guard unit.  Obviously trying to get the day’s training sorties in early. (Sorry I didn’t get a picture but I was, you know, in the pool.)

Noon:  Air temperature, 109.5°.   Despite the morning and evening excursions outside to the pool I was starting to feel a bit cabin feverish.  And I really wanted a bagel. Did I dare make a run to the grocery store down the street?  I dared.

Hey, what were all these people doing out and about?  Didn’t they know they were supposed to be hunkered down?  I hoped they all weren’t craving bagels too!  Whew, scored one sesame seed and one blueberry bagel. Home safe again.

6:00pm:  For dinner I decided on brats and corn on the cob cooked on the grill. Air temperature had dropped to 104° with monsoon looking clouds and wind.  That is okay because my husband does all the grilling.  I stayed inside and set the table.

Sure there are three more days of pretty darn hot still ahead but who am I kidding?  That is how the whole summer is. But this is the last day of our heat wave saga.

listening to the cicadas play their ode to heat

eager to escape the rising sun.

2:00pm:  Movie of the day:  “Young Frankenstein” .  I laughed a lot and small child frequently looked puzzled, especially at the end.  You’ll get it when you’re older kid.

4:30pm:  Looks like we are topping out at a windy (but no clouds) 108° today.  The Heat Wave is over!  To show solidarity with my southeast rain soaked brethren I have decided to make coconut shrimp (Trader Joe’s), oven fries and cole slaw for dinner.  We really need key lime pie for dessert.  Do I dare venture out?  Nah, I’ll enjoy my last hours of hunkering down! 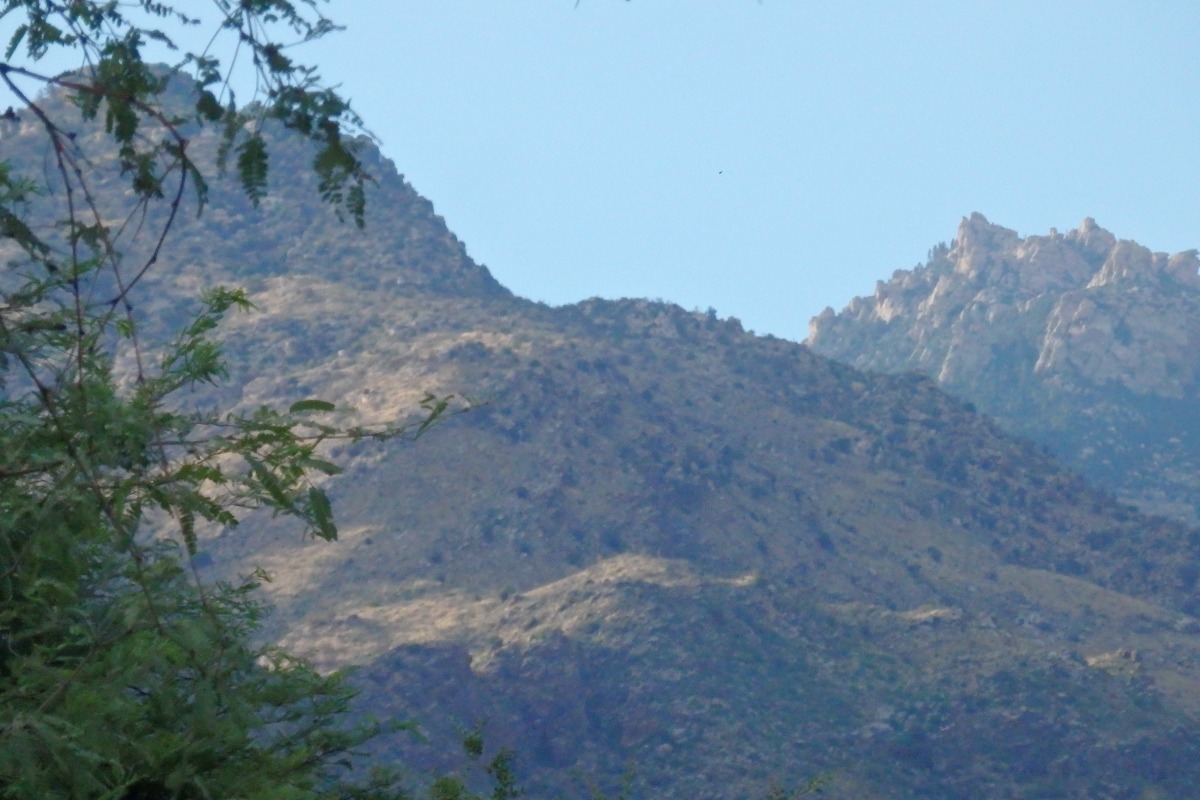 Because of the looong holiday weekend I missed Wednesday HodgePodge. I will try again next week. And yes, I still have two Chicago posts to write. But not today. It is July and I am on vacation, sort of.
So instead, here is a list of what is bringing me joy these days:

Swimming – Like when I was kid.  I leisurely swim up and down the length of the pool luxuriating in the feel of the water and the movement of my body.  I don’t count laps or minutes, I just swim.

“Rogue Wave” – This is a game my son and I invented.  He floats around the pool in an inner tube pretending to take notes and make marine observations.  And then I, the “rogue wave”, “sneak up” and flip him over.  He loves this and making him happy makes me happy.  Plus it is a good arm workout.

Tuna fish sandwiches –  Yup, when I meal planned for the week I actually put sandwiches on the list for dinner. No guilt because I bought a loaf of the good rye bread.

“The Hours Count” – By Jillian Cantor is the novel I am currently reading.  I love books that are fact based fiction.  I get to learn something and be entertained at the same time.

Sleeping – I have been sleeping great lately.  I think it is all the swimming plus getting in my 10k steps some days.  (Well, I was doing really good before the holiday weekend and I am walking as I write this.)

Mother’s Day Swing –  I have been wanting a swing like this for a few years and this year I got one.  I LOVE this swing and even with the summer heat I use it most days.  I like to sit outside around sunset.  It is still hot, but bearable without the sun and if there is a breeze it can be quite pleasant. My son and I often sit there and read a chapter or two from our bedtime book.  I am finding this swing is a suitable substitute for a front porch (for now).

Hope you are experiencing some July Joy!